The Lady of the Sea 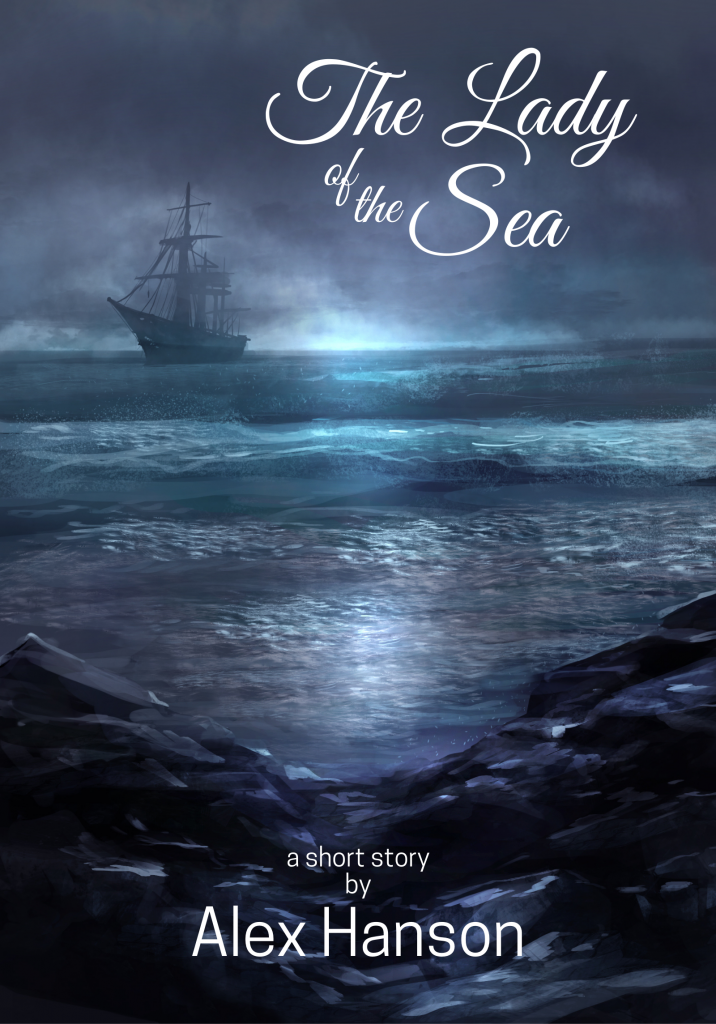 The streets of Se Trosk A Vol were pitch black under a moonless sky. The gods weren’t watching tonight. Like phantoms in the dark, the crew of the Fruska swept through the city, guided by the flickering light of their torches. Any souls unfortunate enough to be caught out of their homes met swift deaths on the seamen’s blades.

Leading his crew with silent signals, captain Vepdago marched at the front, his long, curved sword drawn and dripping red. He was a massive man, a full head taller than any of his crew, half again as broad in the shoulder as a man should ever be, and clad from top to toe in aged black leather. Inky black eyes peered out from under his wide-brimmed hat that bobbed a bit with every step. His face was blank, emotionless, and wind-scarred.

“Quiet now, boys,” the captain murmured, his voice deep and raspy from years of screaming over the harshest southern storms. One such tempest was brewing now, and he glanced back over his shoulder towards the sea when a gust of wind threatened to snatch his hat.

They marched on up the sloping streets, winding their way up the eastern hill on top of which stood a grand house. It wasn’t the grandest place in the booming portside city, but Vepdago’s eyes never left it as he climbed. It was surrounded by sandstone walls in a futile attempt to stop the winds from beating to death the stunted plants that dotted the land around the house: a massive stone structure with three stories worth of rooms Vepdago couldn’t imagine any use for, nor any desire to own. There was something in that house he did want though, no, something that he needed, and he wouldn’t leave here tonight without it, though he didn’t yet know what it was.

Vepdago spurred his men to move faster and the crew billowed over the top of the hill, sweeping across the barren yard to the front door. They made way for their captain who pulled a pistol from his slicker. It was short with a comically wide-rounded barrel and a rod where there should have been a hammer. He placed the barrel directly over the handle on the front door and cocked the weapon by pulling the rod straight back until it clicked. When it fired, the rod sprang forward with such force it smashed the handle clear through the door, and it landed on the floor inside with a clatter.

Vepdago strolled in just as an aged footman came skidding around the corner from a nearby kitchen. He slid to a stop in his stockings, wide-eyed and speechless as men poured in the door behind their towering captain. He’d just opened his mouth to scream when a blade silenced him forever.

The captain merely stood watching in the entryway as his men bustled down corridors and through doors, tossing cabinets, chests, and crevices for treasures that may fetch a coin or two. He let them go and instead gazed up at the grand, curved staircase.

Vepdago stalked up the stairs, his sword tapping against the wall every few steps and his slicker swishing in the silence of the upper floors. He stepped into the third-floor corridor and peered around at the half dozen closed doors.

He walked more briskly now. An oval mirror with delicate silver trimming reflected the whole scene, and a sudden flash of lightning lit the hallway around him but didn’t quite touch the black-shadow figure in the glass as he marched on.

The captain shoved through the fourth door on the right and entered a small bedroom just as a man’s voice rang out from a lower floor.

The room was painted a dull pink, and the furniture was small, like toys. The dresser was topped with dolls and figurines, a few seashells, and a small, white wooden box painted around the outside with symbols Vepdago had never seen before yet knew by heart. He looked to the bed with its dainty silken canopy and fluffy down quilt and, save for a tattered stuffed creature tucked in and waiting on the pillow, it was empty.

He came further into the room, searching for whatever could be so important in a child’s bedroom, and stared again at the little wooden box. He walked to the dresser and reached to take hold of the lid by the smooth sea stone adhered to the top when a small shuffling sound stopped him. He looked back to the bed then down to the black gap underneath. He stooped and peered under, and two terrified blue eyes stared back at him.

A child? A girl, no older than nine. How could this be?

A sharp pain in his temple made Vepdago close his eyes with a wince, and he saw, for but a heartbeat, the face of a girl, a woman, with bright blue eyes and long sun-bleached hair, standing at the pointed prow of a ship, her face speckled with seawater. He looked again to the girl cowering in the dark and saw those same features on her tiny face, not yet matured, a promise of the beauty she’d one day become.

The captain sheathed his sword and reached for the child, but she shrank away with a yelp of fright. He held his hand out, palm up in welcome, and his words came easily, for it wasn’t he who chose them.

Her eyes flicked down to his hand but were still full of anxious doubt. There were more shouts now, in rooms just down the hall, growing louder with each passing second, but the captain didn’t move an inch, just waited patiently for her to accept what her heart was already telling her. Slowly, she slid a shaking hand across the floor and touched his, nothing more than a poke of her finger, as if to check he was real. He smiled, and she laid her palm in his. He curled his fingers around her hand, softly, as if to take them for friendship’s sake and not as hostage. When he beckoned, she slithered out from under the bed and stood gazing up at him, her eyes still wide with cautious anticipation.

He took a firmer hold of her hand and a step towards the door.

“Wait!” she cried, and she snatched the little wooden box from the dresser, hugging it to her chest. They walked together into the corridor.

A man clad in nothing but his pajamas burst into the hall from the bedroom next door with two children, older girls with dark black curls and green eyes, twins, hugging him from behind. They cried out in identical little squeals when they saw Vepdago. Their father, the head officer of Seacraft and Trosk’s naval fleet commander, drew back his lip and glared at the captain.

“She’s not yours, Prosk. She never was.”

Prosk narrowed his eyes. “Who are you?”

“It’s not important,” said Vepdago. “This child belongs to the sea. You took what wasn’t yours, and now you must give her back.”

Prosk raised a pistol. “Over my dead body!”

A flash of lightning came with a deafening crash of thunder that sent the twins squealing again as it started to rain. Vepdago knelt and took the other girl in his arms, and she went willingly, still clutching her little wooden box. Prosk’s pistol dropped a bit.

Another lightning strike punctuated the command, and a violent gust of wind broke a window at the other end of the hall sending the curtains whipping and rain sheeting in on the hardwood. Prosk looked from the window to Vepdago then down to the girls huddled at his back. Slowly, he backed away giving the captain space to move past him and on down the hall.

Vepdago spun with his sword just as Prosk fired his pistol, and there was a sharp clang as bullet met blade. The shot buried into the wall at the captain’s side instead of his back. Prosk stood open-mouthed in the twins’ doorway, and at the captain’s fierce scowl, he dropped his weapon, for good this time. Captain and child moved on through the corridor and down the stairs unhindered.

“Let’s go!” Vepdago barked, and his men all scurried for the door, their pockets brimming with stolen goods. He tucked the child under his slicker as they stepped out into the rain.

“Who are you?” she asked in awe, all worry gone from her face.

“What is it you really want to know, child?”

She thought for a moment, then tried again. “Who am I?”

Vepdago smiled again. “You, my dear, are a lady of the sea, a daughter of Remlar, the great sea god.” He looked down at her, sending a rush of water from the brim of his hat splashing down his coat. He tapped the box in her hand. “But you knew that already.”

The girl nodded and giggled behind his slicker as they headed off down the hill.

Click here for the rest of the stories of Oda Karrith
×
×